My family lived a stone’s throw away from Boulder, Colorado, in the late 1960s and the first half of the 1970s, and I was in college in nearby Denver from 1976 to 1980.   I lived in Boulder off and on between 1985 and 1995, first as a grad student, then working as a young lawyer.  Throughout most of this time, spanning nearly three decades, plutonium parts for nuclear bombs were being manufactured at Rocky Flats, a massive, underground, top secret facility just outside Boulder.

I can’t remember precisely when I first heard Sawada’s steady drumbeat come and go, but it was definitely during the time I was a student in Boulder.  I was in the little cabin in Chautauqua Park where I lived, in a coffee shop, out on a run.

The first couple of times I heard Sawada’s drum, it was a sonic apparition.  I turned to see the source of this unusual sound, but couldn’t locate it.  The next time I heard it, I turned quickly and caught sight of Sawada, taking broad, swift strides, in full monk garb, beating his hand drum.

This was Sawada’s practice.  Morning to night.  For decades.

Sawada is part of a Buddhist sect that emphasizes walking meditation and work for peace.  Much to his parents’ dismay, he became a monk as a young man, and ultimately moved to Boulder, alone, to bear witness to the madness of the nuclear arms race.  Many years later, a couple of other monks from his order eventually joined him in Boulder, perhaps, in part, to lessen the physical toll this form of protest must have taken on Sawada.

Sawada’s presence in Boulder–the sound and sight of him at random times during the week–made a deep impression on me.  I got curious about him again a few days ago, after talking about him during our Full Moon Zen Zazenkai last Saturday.  While still alive, he is mostly forgotten now.  There is scant evidence of his life and practice online, though I did find a few crumbs, including an oral history interview that is part of a series of interviews documenting protest activities at Rocky Flats.  It seems memory of Rocky Flats, and even the Cold War itself, is fading.  I worry about that.

Boulder is and was a center of Buddhism’s transplantation and growth in the United States, so it also was interesting to find an article in Tricycle about Rocky Flats.

In 1983, years before I heard Sawada’s drumbeat, I was one of the student organizers of a massive, peaceful protest at Rocky Flats.  Nearly 17,000 people of all ages gathered to join hands around the above-ground perimeter of the facility. 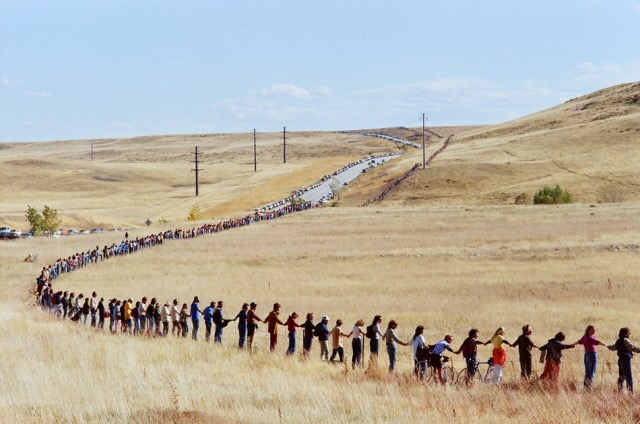 Bearing witness to the cries of the world is an important ideal and practice in Zen.  Roshi Bernie Glassman, my Dharma great-grandfather, made bearing witness one of the three pillars of the Zen Peacemakers order he founded.

I spoke about Sawada during our Zazenkai, because I was recalling and appreciating both the way in which his meditation was a practice of bearing witness, and how the monks who eventually joined him in Boulder made the practice communal, taking the baton from him throughout days and weeks to sustain the practice.  People came and went during our Zazenkai, according to their availability and needs, yet there was never a time when any of us sat alone.  I had this same sense of bearing communal witness Saturday, as we sat amidst the great turmoil and suffering of the present day.

The world seems at full boil.  Perhaps what we do on the cushion, and what our time on the cushion inspires and helps us to do when we’re off it, will reduce the temperature just a bit.

If you want to view paradise, simply look around and view it.
– Willy Wonka

If you want the moon,
here it is.
Catch!
– Nantenbō